Songwriting Tip: Creating in a Group, The Collaborating Game

Creating in a Group – The Collaborating Game 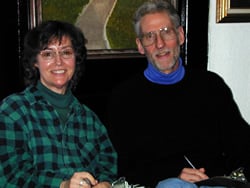 Here’s a fun way to get your creative juices flowing. Get two or three, or more people in a room to play the collaboration game. The rules are simple:

You can point to your nose and shake your head to emphasize this rule! This means anything goes! Ignore all your self-imposed limitations and barriers. Utterances such as “I can’t sing,” “That won’t work,” “I’m not good at lyrics,” “That’s stupid,” and all the variations on that theme are NOT ALLOWED. You’ll be surprised how easy it is to eliminate the negative if everyone agrees to this rule.

If you judge your ideas before you express them or simultaneously with expressing them, you stop the flow of your ideas. When working in a group, each person has the responsibility to say WHATEVER IDEAS ARE TRIGGERED IN THE PROCESS. If you think to yourself, (trying to avoid Rule 1 by not saying it out loud) “That’s stupid,” and stop yourself from saying it, you have eliminated the stimulus that might have inspired the next person’s thought. Our rule of thumb is, if you really think it’s stupid, you are OBLIGATED to say it out loud. In the early stages of creating, all ideas are good ideas! The time for judging them comes much later in the process. Leave your judge outside the door for now.

No noes means all yeses! Every idea can be greeted with a “yes.” Every idea will inspire new ideas in other members of the group. Here are some positive phrases that can be used to build on ideas:

These phrases are indispensable tools for expressing respect for all the ideas that flow in a collaboration.

Be silly. Make jokes. Say the wildest thing you can think of. Laugh! Aren’t we lucky to be writing songs?

You can use any photo as the stimulus for the game. For example, use a photograph of two people kissing.

There’s one at http://www.masters-of-photography.com/D/doisneau/doisneau_kiss.html Double-click the photo and it will be large enough to fill one page, which you can print out. Each person in the room takes a turn saying a sentence or two about the story of the picture.

The idea is to say anything that comes to mind very quickly and then pass the picture to the next person. Keep going round and round until you really feel you’ve dug that kissing well as deep as you can! Here are a couple of examples:

- She just told him she’s pregnant.

- Their braces are stuck together and they’re going to an orthodontist to get unstuck.

- He doesn’t know her at all. He’s kissing her to distract her while he picks her pocket.

There is no end to the ideas that you can come up with. What did s/he he say just before this photo was taken? What are the fellow behind them and the woman next to them thinking? What’s going to happen next? These are the questions you will be asking about the people in your songs, so you are practicing the art of characterization.

This game of getting the creative flow going without boundaries can be played with any photograph or curious item. You will have to remind yourself to return to the fun, open attitude of this game whenever you feel yourself getting bogged down creatively.

Collaboration business tip: We think it’s best if everyone agrees up front that the song will be shared equally by all the writers who are participating in the collaboration. Mathematics can kill a collaboration. That’s why they call it division!

Pat & Pete Luboff have recordings by Snoop Dogg ("Trust Me," the first single from the platinum-selling album "Top Dogg") Patti LaBelle (gold album and the title song for "Body Language: the Musical"), Bobby Womack (No. 2 on Billboard's Black Music chart), "Hometown, USA" from the John Travolta movie "Experts," on Michael Peterson's new CD, recently charting Miko Marks, and more.  They've been teaching songwriting workshops together since 1979. The Luboffs are the authors of the Writer's Digest new book "101 Songwriting Wrongs and How to Right Them" and "12 Steps to Building Better Songs," which they self-publish. For more information, visit http://www.writesongs.com