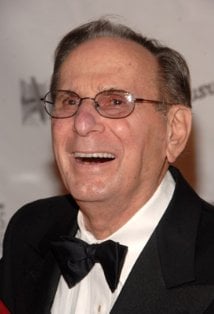 Hal wrote first song for bandleader Sammy Kaye and then teamed up with Burt Bacharach to write the biggest hits in Pop history. He has won a Grammy award as well as a Academy Award. He also wrote the lyrics for the following film scores: "Wives and Lovers," "Casino Royale," "April Fools," "Lost Horizon," "After the Fox," "The Man Who Shot Liberty Valance," "Oklahoma Crude," "What's New Pussycat?" "Two Gals and a Guy," "Promise Her Anything," "Alfie," "Butch Cassidy and the Sundance Kid," and "Moonraker".

—"(There's) Always Something There to Remind Me"; #1 on UK Charts

Hal David Quotes: "Now, how do I go about the business of writing lyrics? I wish I really knew. If I did it would make writing much easier for me. Because I have no formula, sometimes it flows smoothly and other times it is like rowing a boat upstream. Most often a lyric starts with a title. A line in a book I am reading may set me off. Other times some dialogue in a play or a movie becomes the catalyst. More often than not the idea just pops into my head-where it comes from I hardly ever know....In writing I search for believability, simplicity, and emotional impact..."

"The form of songwriting is very restrictive because it's in a very small frame. But because of its restrictions you get a bonus you couldn't get in any other art form. Because it is in this little microcosm, if it works it should have a greater explosion, a greater impact. And I think that's why songs have a greater effect on the public than almost any other form of creative work."

"I'm a laborer. I never accept my first idea. I always look for a new approach. The most difficult part of the whole process for me is letting go; of saying 'that's the best I can do,' and go on to the next song."