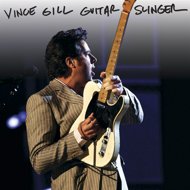 (Source: Associated Press) The title of Vince Gill’s new album focuses on his instrumental skills. But the music more intently highlights another talent: songwriting. On “Guitar Slinger,” Gill concentrates on lyrics about friends and issues, turning out stories that are sometimes entertaining and often touching.

Some draw on his sense of humor: The title is a roadhouse rocker inspired by Gill’s catastrophic loss of musical equipment in Nashville’s 2010 flood. Others confront tragedy: “Bread and Water” is based on the death of Gill’s older brother, who struggled with daily existence after suffering a severe head injury. “Billy Paul” questions why a close friend took such a deadly turn, while “Buttermilk John” honors the late steel guitarist John Hughey, who worked with Gill for many years.

As usual, Gill’s guitar playing adds color to his songs, and he balances the difficult stories with those of love and faith: “Who Wouldn’t Fall In Love With You” is a beautiful love song to his wife Amy Grant, and “Threaten Me With Heaven” explores his religious beliefs.

Altogether, “Guitar Slinger” shows Gill utilizing a veteran’s craft to delve into truths essential to who he is. It shows how a superstar can age gracefully while continuing to sharpen his talents.

CHECK OUT THIS TRACK: “If I Die,” written with Ashley Monroe of the Pistol Annies, is an emotionally resonant prayer that balances sin and salvation in beautiful terms.

Vince Gill has recorded more than twenty studio albums, charted over forty singles on the U.S. Billboard charts as Hot Country Songs, and has sold more than 22 million albums. He has been honored by the Country Music Association with 18 CMA Awards, including two Entertainer of the Year awards and five Male Vocalist Awards. Gill has also earned 20 Grammy Awards, more than any other male Country music artist. In 2007, Gill was inducted into the Country Music Hall of Fame.

For more information on USA Songwriting Competition, go to: