Are you making any of these mistakes in Co-Writing Songs? A “Split Sheet” Just Isn’t Enough

Are you making any of these mistakes in Co-Writing Songs? A “Split Sheet” Just Isn’t Enough
by Justin M. Jacobson, Esq., The Jacobson Firm, P.C.

When a band enters the recording studio they typically sign a "split sheet," a document which specifies each person's contributions and ownership percentage on a given track. This often isn't a sufficiently detailed agreement however, and artists should make an effort to take further legal precautions in order to avoid issues down the road.


For some unexplained reason, frequently when artists go into the recording studio to work on a track together, they typically sign a “split sheet” and think it suffices.  In reality, the traditional songwriter “split sheet” could merely be used as a stop-gap measure that is meant to ensure all parties are on the same page and understand what was contributed to the song by each party. Ultimately, songwriters should enter into a more elaborate and complete agreement to ensure the song can be properly used.

A “songwriter split sheet,” or “split sheet” for short, is a form that is signed by all the parties involved and lists each producer and songwriter. Each party’s contributions and ownership percentage of a particular musical composition are detailed. A typical “split sheet” should also include additional information about the parties, including each person’s physical mailing address, performance rights organization information (in the U.S., ASCAP, BMI, SESAC), publishing company information (if there is one), birthdate and Social Security and EIN number. 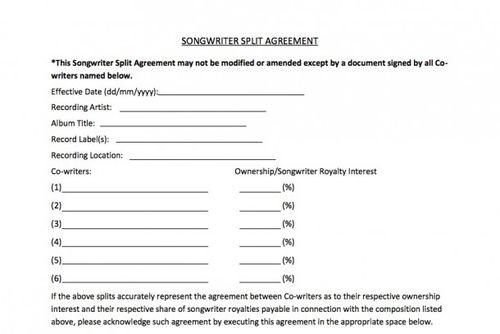 This document may seem to be comprehensive enough to cover the parties involved as it lists each party’s specific contribution (i.e. lyrics, beats, melody, etc.) and the corresponding percentage that each party owns of the final piece; however, it does not specifically address numerous important issues that could make or break a tune and severely inhibit its commercial value.

Generally under U.S. Copyright Law, if no agreement exists between the contributors to a particular copyrighted work, the assumption is that all of the contributors are considered joint-authors and own an undivided equal share of the song. This permits each owner to issue third-party licenses without the approval or consulting of any other owner as long as they account for any profits they made to the remaining owners.  While this may be acceptable in situations where the actual work was equal among the contributors; it is not always the case, and could cause some serious issues if the composers do not understand this point.  For example, if members of a band create compositions, sign a split sheet and then break up; each individual from the group can record and release the same material, merely subject to an accounting and payment.  This is frequently thought of as a nightmare situation.  Therefore, the right to issue or enter into third-party licenses for the finished material should be agreed upon in a more formal contract. This is an important point that a typical “split sheet” does not address at all.

Additionally, a standard “split sheet” does not speak about many ancillary and important elements to a song’s commercial value.  This includes any right of publicity matters, such as utilizing a particular producer, artist or songwriters’ name in connection with the publicity and marketing of a finished work. Other important matters to address include the right to request a proper accounting from the other parties, the right to audit and inspect a particular co-owner’s business records and the right to recover (i.e., recoup) certain documented expenses (i.e. recording, engineering, mixing, mastering costs, etc.). The agreement should also address the right to proper attribution or credit on the finished work.

Furthermore, the traditional “split sheet” does not mention any warranties or indemnifications by any of the parties to each other. Without these warranties, each party could be liable for any potential unauthorized sampling, lack of appropriate rights clearance or any other unauthorized or infringing uses in the finished work by each party. A “split sheet” also does not discuss the party’s right to approve any finished work or the right to approve any marketing or promotional campaigns and budgets for the track.  Finally, it does not address which state law to apply to a particular situation and does not specify where any disputes or claims would be adjudicated.

Clearly, the traditional sentiment and reliance on the outdated and minimal “split sheet” should be disregarded and all the contributors should enter into more formal and elaborate agreements. This is necessary to ensure all the important issues are addressed and that each party is properly protected and aware of their rights and interest in the finished work.

This article is not intended as legal advice, as an attorney specializing in the field should be consulted when drafting any formal agreement.