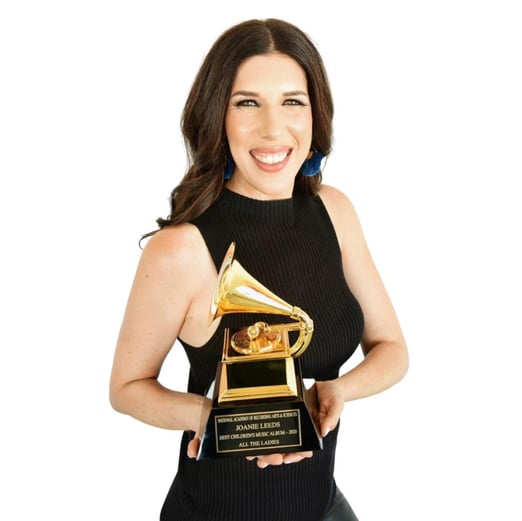 Joanie Leeds, First Prize winner of the 2013 USA Songwriting Competition (as well as our current finalist) has just won a Grammy in the 63rd Annual GRAMMY Awards (2021) in the "Best Children's Music Album" category for her album "All The Ladies". The album is produced by 2019 GRAMMY Winner, Lucy Kalantari, an honorable mention winner of the 2018 USA Songwriting Competition. See list of Grammy winners at: https://www.cbsnews.com/news/grammys-2021-winners-and-nominees/

"It is truly an honor to have received the GRAMMY for All the Ladies as my peers in the music industry voted. It was a collaborative effort with a team of talented women and I am so filled with joy it was heard by so many", said a jubilant Joanie Leeds, a singer-songwriter from New York City.

As a musical theatre major at Syracuse University, Joanie began composing her own songs. After graduation, she did the New York City thing, bartending at The Bitter End when not onstage performing. While making the rounds as a singer/songwriter in New York clubs (her favorites were Rockwood, The Bitter End, The Living Room, Arlene’s Grocery and CBGB’s), Joanie tried her hand at about ten different day gigs until a friend suggested that she get a job where she could sing with kids during the day and perhaps sleep at night.

Andrew Jannakos, the current Overall Grand Prize winner of the 25th Annual USA Songwriting Competition, as well as Best Country Song award was recently signed to Sony Music Nashville. His debut single hit #65 on the Billboard Hot 100 charts as well as No. 1 on the Billboard Emerging Artists Charts.