The Valuable Chord Tricks All Major Hit Songwriters Use (Part 1) 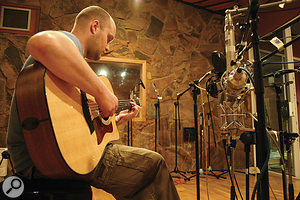 The vast majority of songwriters begin their composing life depending on the same 4, 5, or if they are really adventurous, 6 chords. Those chords are technically called “diatonics”, and they’re the chords built on the first six notes of any major scale. There is also a 7th chord that technically should be added to the set, but it has been considered a troublemaker for years, so we’ll come back to that in a moment.

For now, check if any of your songs are limited to using only two or more of these 6 chords. Include checking through any songs you play that were written by other people.

Almost 50% of all the hit songs released over the past fifty years, were composed using only diatonic chords. I’m sure you probably know many of these songs. They tend to sound very similar to each other.

But what if you want your song to sound a bit more interesting than the run-of-the-mill song you hear everybody else writing? Well, officially that’s easy. You just need to add in one or more of the 18 chords not included in the diatonics list. But knowing which one to add, and where to add it is the hard part.

It’s also dangerous. The moment you leave the safety and familiarity of the key chords, you risk sounding strange, jazzy, progressive, scary, discordant, unpleasant or worse, sounding amateur. And that’s enough to stop most composers from venturing beyond the same old 5 or 6 chords. So, you can understand why there are so many songs written that way, when trying anything else is likely to make you sound like you don’t know what you’re doing.

That’s why top professional songwriters depend on 6 specific chord usages or tricks to help them effortlessly place the right chords in the perfect spot, ensuring their songs always sound exceptional.

This first lesson is going to address the easiest of these chord tricks to insert into your writing. It involves the 7th chord that we left out of our original list of diatonic chords at the beginning of this article. It’s called a diminished chord. In the key of C it would be a Bdim, and is technically the seventh chord in the diatonic family, and would be added to the other six we’ve discussed already, if that is, it didn’t sound so odd to the ear of the general public.

Because of its discordant sound, the diminished chord has been replaced over the past 50 years within popular music, by the far more appealing and pleasant sounding “flattened seven (b7).” In the key of C this is a Bb.

Although the flattened 7 doesn’t technically belong in the diatonic family of chords, ever since the introduction of the blues, it’s been adopted and included in hundreds of hit songs that would otherwise have been limited to 5 or 6 predictable diatonics. The power of flattened 7 chord in a major key is instead of having just three major chords to write music with, it gives you a 4th major chord. This 4th major chord makes a difference! Try it for yourself. If you are trained it music theory it may seem like you are breaking the rules, but your ears will tell you something quite different… you’re enhancing the music.

There are many ways to use this new addition to the family. One common way is to place it between two of the same chords. This was one of the ways favored by The Beatles. For instance, in the key of C that could be C-Bb-C or F-Bb-F or Am-Bb-Am.

Another option is to use it at the start of a song section, possibly a bridge, giving the song a much-needed lift at that point.

On the other hand, when placed at the end of a verse section, it can create tension that will be resolved during the chorus.

But no matter where you place the flattened 7 among the other six diatonics it will sound completely at home. In fact, it will spice up any standard song just by its inclusion.

Try playing around with adding it to the other 6 chords. You’ll like how it sounds, and you’ll quickly realize that you’ve heard that type of chord movement before in higher quality songs from well-respected writers. Give it a try and see if you don’t immediately sound more like a pro.

Dave Kelly has worked closely with many of the greatest musical artists in the world, including Bob Dylan, The Beatles, Stevie Wonder, Pink Floyd, Genesis and Aerosmith. He is an award-winning recording artist and songwriter and has recently completed the first volume in the Secret of Songwriting Series entitled Secret of Chords (www.secretofchords.com) with the second volume, Secret of Melody, due out late February.