Songwriting Tip: Turn Your iPad Into a Recording Studio

Turn Your iPad Into a Recording Studio 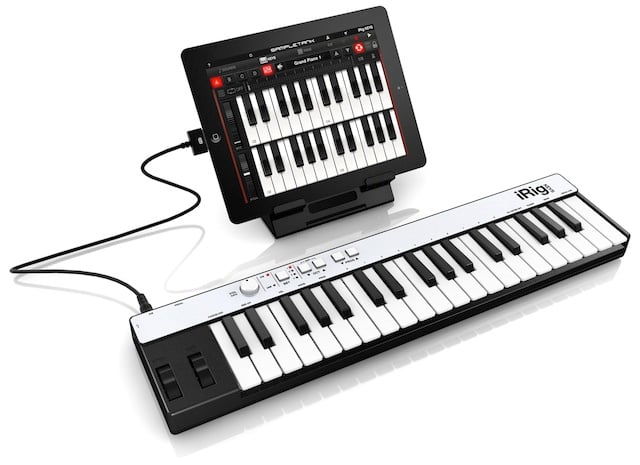 DAW (Digital Audio Workstation) Apps. No, Pro Tools have not made any apps for the iPad yet. However, there are some promising apps:
1. Auria (WaveMachine Labs) - This is the first app that supports the industry standard of 24 bit//96kHz.

4. GarageBand (Apple) - This is now made for the iPad.  GarageBand lets you play a collection of highly expressive Touch and Smart Instruments that sound just like their real counterparts — but let you do things you never could on a real instrument. You can record, mix, and share your songs, too.

5. Portastudio (Tascam) - This brings 30 years of easy-to-use home recording to your iPad. Based on the PORTA ONE recorder that revolutionized recording in 1984, the Portastudio app records up to four tracks with a cool retro/vintage vibe. Record one track at a time using the built-in mic or a headset microphone connection, monitoring on authentic VU meters. A cassette transport with position counter tracks your position while you mix with level, pan and EQ controls. When you're ready to mix, the built-in mixdown function saves your song as a CD-quality WAV file. Your mix appears in iTunes when you're finished, ready to share with friends and bandmates.

Audio Interface. Just like a laptop or desktop, you would need an interface:
1. Focusrite iTrack Solo - provides the great solution for recording your instruments and vocals using an iPad and is a certified ‘Made for iPad' device.

3. TASCAM iXZ - a portable interface for recording with your Apple iOS device. It provides the inputs you need to record nearly any acoustic or electric instrument to any of the thousands of recording apps on the app store, including Apple's own Garage Band or TASCAM's Portastudio.

4. Alesis iO Mix - you can mix and record up to four channels of audio into your iPad. The Alesis iO Mix is the first device that turns your iPad into a powerful portable studio, allowing you to record multiple mics or instruments directly into GarageBand or any other compatible Core Audio app.

5. Alesis iO Dock - the first device that enables anyone with an iPad to create, produce, and perform music with virtually any pro audio gear or instruments. The iO Dock is a universal docking station specifically designed for the iPad, and it gives musicians, recording engineers, and music producers the connectivity they need to create and perform with iPad. Connect all your pro audio gear to virtually any app in the App Store with the iO Dock.

iConnectMIDI (iConnectivity) - Own a MIDI-equipped keyboard controller, guitar, drum kit, or any piece of gear? You can now tap into the unlimited power of the App world!

Music Keyboard:
1. iRig Keys (IK Multimedia) - portable keyboard control, the IK Multimedia iRig Keys 37-key USB/MIDI controller is ready to perform. It's got all the goods to play your apps and virtual instruments expressively, like velocity-sensitive keys, pitch bend and mod wheels, and an input for an optional expression pedal or sustain pedal. (see picture above)