7 Tips to Get Out Of a Songwriting Rut 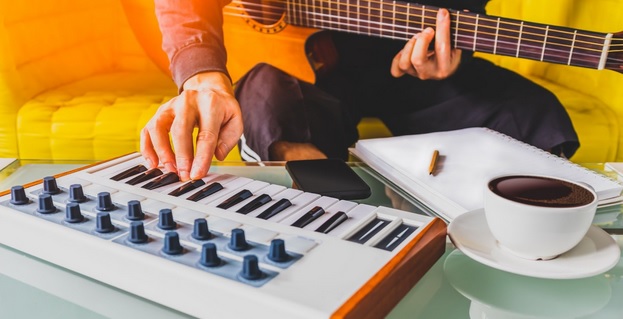 Songwriting is like exercise. The more you do it, the stronger you become. It's so important to develop consistency and routines around any creative pursuit, because, like with physical exercise, if you don't work those muscles on a regular basis, and in a meaningful way, things get painful and difficult.

And, eventually, it becomes a part of who you are. Now, you're writing more and more, and your songwriting muscles get big and strong. And that's a huge part of the puzzle. However, this is where a different problem tends to set in for many songwriters: We get stuck in a rut. We adapt to our routine and it stops challenging us. Just like our bodies eventually adapt to any exercise regime and we lose the benefits, unless we mix things up on a regular basis.

Tip #1: Write With Someone Else

Writing with other people can be scary. It forces you out of your comfort zone. It forces you to think differently. It forces you to relinquish control. But, it's one of the best ways to grow as a songwriter. There's nothing more detrimental to growth than that dreaded comfort zone. Eleanor Roosevelt said it best: “Do one thing that scares you every day.” And if co-writing seems scary to you, I think you have to try it out!

These are all things that, as songwriters, we should be doing on a regular basis anyway. But, when you write with someone else, you are forced to do these things in a much more immediate way.

Writing with another person also introduces you to different methods and work ethics than you're used to, and that will expand your horizons and add tools to your arsenal that can be very helpful down the line.

Lastly, co-writing is a social experience. Even if you do it online, through Zoom or a similar platform, you're interacting with another human, and in a field that can often feel pretty solitary, that can be invigorating. Just like with physical exercise, it can be very motivating to share the experience with another person.

Tip #2: Write On a New Instrument

Whether you're a virtuoso or a rank beginner, your familiarity with your usual instrument can definitely make your songwriting efforts feel stale at times. So, try writing on an instrument you don't usually play.

This will force your brain to think in a different way, and force you to examine musical ideas you never would have thought of otherwise. In some cases you might struggle just to make anything happen on the instrument you just picked up, and this can be a good thing. It might force you to write a song you never would have thought of otherwise. Perhaps it sounds way simpler than what you normally write, but trust me, that's often a good thing. Some of the best songs of all time are the simplest. It's like Harlan Howard once said: "All you need is three chords and the truth."

Tip #3: Write a Song in an Unusual Genre

Setting yourself a goal to write a song in a genre you've never worked in before can lead you to some great creative mining. Not only will you need to do some research and figure out what makes that genre tick, but you will need to make it your own in some way, and it will not only produce an interesting and fresh songwriting session for you now, it will also add new tools to your songwriting arsenal moving forward.

Personally, as a songwriter who works in theater much of the time, this has been extremely powerful for me. Writing songs for theater productions means the song must fit the story, and that can mean genres I never would have thought of working with otherwise. As a result, I keep venturing outside my comfort zone, and through the years I've picked up countless new ideas for my work outside the theater.

To stay fresh is to explore something new all the time, and even if you are firmly rooted in a certain genre, bringing in influences from other genres is a good way to surprise your listeners and do something interesting. Starting by writing a whole song in a new genre is a great way to expand your horizons and introduce yourself to new ideas.

Tip #4: Write In a Different Order

One of the things that can become a real comfort zone trap is always writing in the same order. This can mean a couple of things.

First of all, what part of the song do you usually start with? Many songwriters start by writing a catchy chorus, before moving on to the verses, bridge and so on. For others (like me) it's the other way around - verse first, then chorus. Regardless of your approach, switching it up will make a big difference. Again, it forces you out of your comfort zone and makes you think about the process in a different way.

Secondly, do you start with music or lyrics? Many songwriters start with music, while others start with lyrics. As before, switching it up will make a big difference. Personally, I always used to write music and lyrics pretty much concurrently - I would play around with some musical ideas and hum random words related to my theme or topic, until I found something, and the melody and lyrics would be born pretty much at the same time. Working in theater changed all that, as I was mostly writing to pre-existing lyrics. Now, I had no control over the number of syllables in a line, and was quite constrained in meter and rhythm. This produced songs unlike anything I had written before. I also had to start writing some instrumental pieces, which I had not done before, and some song ideas without lyrics, for the lyricist to fill in.

All of these things greatly stretched my songwriting muscles.

So switch things up. Turn your normal songwriting routine on its head and come up with something new.

If you're a veteran instrumentalist you may take your chops for granted. But for many of us, learning new chords and scales is a great way to get new musical ideas.

Learning new chords and scales is a great way to expand your musical vocabulary, and will lead to ideas you never would have thought of otherwise.

In the new series McCartney 3, 2, 1, Paul McCartney shares a great story about how he and John Lennon, who taught themselves to play guitar together, as teenagers in Liverpool, would always teach each other everything new they picked up, so their chops grew at the same pace. One day, Paul and George visited a guitar shop and ran into a regular who was a jazz guitarist. This guy taught them a new chord shape they'd never seen before (I think it was Bdim7). Of course, they rushed over to teach the chord to John. At this time, Paul and John thought that appearing French would get them more girls, and so at parties, Paul used to sit around and play his guitar and sing in nonsense French. This new jazzy chord was impressive, so he added that to the nonsense French song.

A few years later, The Beatles needed a song, and John suggested Paul go back to "that French song". He did, and that turned out to be Michelle, one of my favorite Beatles songs. And that jazzy chord really makes it shine!

So try out some chords and scales you've never used before. Look them up online or get one of those chord dictionaries, and see what musical ideas are born.

When you feel like you're stuck in a songwriting rut, it can help to look at other people's songs. Learning new songs by other artists is a great way to expand your musical vocabulary, and will give you new ideas for your own songs.

Learning new songs is also a great way to see how other people approach songwriting, and can help you learn new methods and techniques. Quite often I find myself discovering ideas I had never thought of when learning to play cover songs, and they can spark something new in my own songwriting. I might come across an unknown chord, an interesting guitar riff or a chord progression I would never have thought of trying out myself. Of course, we must always be careful not to be TOO inspired and inadvertently start ripping others off, but there are definitely a lot of benefits to be had from learning cover songs.

A good challenge is probably my favorite way to break out of a songwriting rut. I love to set myself a challenging goal and working like crazy to get it done. It has sparked some really great songs for me.

There is an endless variety of songwriting challenges you could set yourself. One option is to write a whole song with just one chord, or maybe a melody with just one note where the chord progression makes the music interesting. You could write a whole song based on just one line of lyrics, and see how you could make that interesting (See the Beatles song "You Know My Name (Look up the Number)").

You can also challenge yourself to write faster and be more productive than normal. Push yourself way out of your comfort zone by speedwriting. A common challenge is to do a 24 hour session, where you write continuously and try to come up with (and record demos for) as many songs as you can.

My favorite kind of challenge, though, is the kind that promotes a regular songwriting routine. Which is why I created a 4 Week Songwriting Challenge that gives you a daily songwriting prompt and challenges you to write one song every single day, for those 4 weeks. That's 28 songs in one month! And because it's a challenge, you're not allowed to stay in your comfort zone - you follow the prompts and you're not allowed to get up from your songwriting spot until the song is finished. I guarantee you that after those 4 weeks, you will be well and truly out of your songwriting rut, and you'll have a lot of songs to show for it. They might not all be masterpieces, but they're your songs, and you're sure to at least have great material you can rework in the future.

So, there you have it. 7 ways to break out of a songwriting rut.

Eyvindur is an Icelandic singer-songwriter and shares his tips and experience as a veteran professional songwriter on his web site, https://strongwriting.net