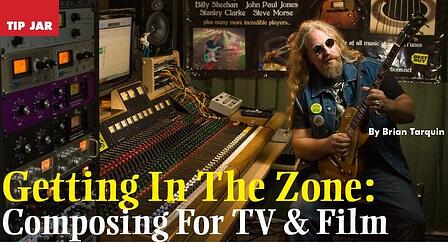 There is more to composing than just buying a computer and a handful of plug-ins! After 20 years composing for television and films, with three Emmys and seven nominations, I’ve come to rely on instincts and input from producers and music editors around me. It’s a team effort, and the sooner you learn this lesson, the better.

1. Get the Vibe. Remember you are composing music for the show, which will be heard by its fans. Understand the viewers and what works between score and picture. In Ken Burns’ Civil War series, what worked was that beautiful solo violin melody, not blazing metal guitar. Proper background score is a key to a successful series.

2. Understand exactly what the producer or music supervisor wants.This can be a very tricky thing. It can change from day to day and from moment to moment. I found that it could become confusing if more than one person gives you directions. The best thing to do is ask for musical references from the main person giving the instructions. For example, if they are requesting a vibe like Led Zeppelin-meets-Metallica, then make sure you get your project’s creative team to specify what elements of each band they like and how they want them combined. Ask as many questions as possible to nailing the exact vibe they want.

3. Don’t rush it, take time and get it right. This really pertains to composing for new clients. Even if you are juggling many projects, as we all seem to do, give it the time it deserves. Clients can sense when you are rushing and not giving it the proper attention. Remember the kids in school who had six weeks to do their final paper, but waited until the night before to do it? By showing the client that you care about their project, it will almost ensure you a continued relationship for future projects.

4. Use real instruments when you can, don’t rely on plug-ins and sample CDs. As a guitarist and recording artist for many years, it is annoying to me that there are so many electronic composers today who take the shortcut and substitute talent for computer plug-ins and samples. Instead of getting a real drummer they use some drum “extraordinaire” plug-in and samples from CDs of horns and bass. It makes no sense––just hire real musicians to make it sound as authentic as possible. Back in the day, I remember laboring through sessions getting musicians to nail the right sound before the digital era and plug-ins; it actually was a great challenge to see if you could achieve the sound for the project and a real feeling of reward when you did.

5. Don’t reuse old cues. This is something we are all guilty of––yours truly as well! In all my experience I’ve found that trying to rework old cues to try to make them sound different for a new client is more time consuming than actually composing from scratch. And trying to pass off an old cue to a new client thinking it’s “close enough” is bad business, because nine out of 10 times the client will have so many changes that you will be doubling your work. I don’t know how many guys do this, but it’s a lot like trying to turn a polka song into an electronica tune and passing it off to the client. Believe me, they will know!

6. Watch the show and understand how the music is used. Believe it or not, there are composers out there who do not bother to watch the show they are composing for, which seems like a recipe for failure. Set your DVR to record a few episodes and see how the music is synced to picture and compose accordingly. Before I even start composing for a new show I always watch a number of episodes and then go back to the music director and ask what specifically worked for those shows in regards to the music. I also like to throw out ideas to the music director before I proceed, to see if I’m on track.

7. Make sure to send WAV samples (no MP3s) for approval. I’ve learned not to send MP3s to people, because no matter how many times you explain to them that it’s an MP3, they always get bothered about it sounding “too compressed and lacking bottom end.” Well, that’s because IT’S AN MP3 and you’re listening to it on COMPUTER SPEAKERS!!! Then of course they look at the file size and say, “Oh, okay then, never mind.” So there goes a half-hour of my life I won’t get back!

8. Never send a demo sample! Man, this is such a catch-22, you can’t believe! Clients always say, just send a demo so I can hear how it’s coming along. So you send a rough mix to them and the first thing they say is, “It Sounds Like A Demo!” Well DUH, it IS a demo! So if you are going to play something for anyone for the first time, it should be the final mix of the song. Back in the early days of being a recording artist I remember the record label would always tell me to just send demos or rough mixes of the songs “so we can get an idea of what you are working on.” These were the days before I had a nice recording studio; my setup was just a Tascam DA-88 and a cheap Carvin mixer. So off the rough mixes went and the label would come back with, “It sounds like a demo!” Well yeah, that’s because they are demos that you said were okay to send!

9. Keep in good communication with the producer or music supervisor. This is one of the most important things to do. Always check in with the client, especially if you have a long lead-time for the final deadline, because ideas can change. For example, that song they told you to emulate at the start of the project may have changed three times and the client might have have forgotten to tell you. Of all my advice to you, this is the most crucial! I’ve been involved in projects that started off as heavy metal, then midway became techno and then finally wound up as a punk song I had to compose from scratch. Yes, it’s a lot of work and chasing, but it’s all part of the gig.

10. Never say “That’s the best I can do!” Many of us have been at the end of our rope with certain clients, for one reason or another––you want to say “I’m done, you do it!” I certainly have been there with a few people, but the best thing to do is ask for an extension if the changes they request become too much. Step away from the project for a few days, if possible, then come back to it with fresh ears and appease the client.

The multi-Emmy-winning composer-guitarist Brian Tarquin has established himself as a top TV composer-recording artist and owner of Jungle Room Studios. Some of his accomplishments include writing the theme music for MTV’s Road Rules, as well as producing music for many other TV shows such as CSI, ABC’s Making The Band, Extra, Alias as well as the Keanu Reeves film, The Watcher, and many more. Visit Tarquin’s music catalog at http://bohemianproductions.net/musicsearch.html. To see his recording facility, Jungle Room Studios, visit http://youtu.be/P9QEUO1K0pw.