Burt Bacharach: How I Write 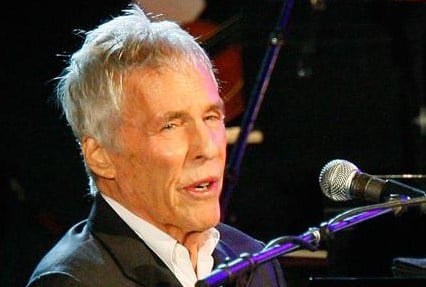 The great American legendary songwriter, responsible for 73 Top 40 hits on the U.S. charts (That's What Friends Are For, The Look of Love, etc), talks about how he writes a song, and the time Miles Davis complimented him. His new memoir, with Robert Greenfield, is "Anyone Who Had a Heart: My Life and Music".

Walk me through the process of writing a song.

OK. It works different ways. You either work with a lyric first, and set it to music. Like the musical we just had that previewed at the old Globe. All the lyrics came first, and I set the music to it. Or a song like “Alfie,” the lyrics came first because it had to be about what the movie was about. For musicals, we have to move smoothly, seamlessly from dialogue into music, so you can see why it would not be advantageous to write music first in situations like that. But it can happen the other way, too. You can have a melodic refrain, a tune with no lyrics. Even when I’m writing with that, even if I haven’t started working with a collaborator [lyricist] on that particular song, I will begin with dummy lyrics. I’ll just make a lyric up in my head—whatever it may be. It means a lot to me to have words with me, when I’m sitting at the piano. The words should sound good with the notes that I’m singing—that helps me more than just hearing it on the piano. I need something to lead the way ... an instrument, let’s say.

How much do you usually write during one session?

I’m not a fast writer. Never have been. I may get the whole synthesis of something, or most of it, an initial impact. But you’re not going to get something every day. But it’s important that you visit your worksite every day, even if it’s just to improvise, touch the piano, play some chords. Be in touch with your music. I equate it with being a tennis player on the circuit. You don’t take three weeks off and expect to get by the first round at Wimbledon, you know?

If you feel yourself getting stuck during a recording session, what might you do for inspiration?

I just try to revisit it. I’ve been stuck. So much of the material I’ve done, I’ve made entirely myself—wrote the songs, orchestrated them. I’ve had a room full of musicians in a studio and I’ve gotten stuck on how that record should go down. That’s the key point, because for me the song lives or dies by what happens in the studio. That’s the life-or-death moment of truth. It will either succeed, which means you get as close to perfection from the vocal and orchestra ... you’ll never get 100 percent, but as close to it as possible. When I do get stuck, since I’m responsible for how that record is going down, if there is a moment that’s a bit of a train wreck, I’ll break the orchestra up and go into the men’s room. I’ll sit down inside a cubicle, on the toilet seat, totally away from the keyboard, and try to hear it all in my head. Where it’s faulting. Did the strings come in too early? I’ll hear it better in my head, and then go back into the control room and listen to the recording. It’s the fastest way. It’s worked for me.

Do you have any distinctive habit or affectations related to performing?

When I started to perform, I was very nervous. I grew up behind performers in the music business. It never was until I started performing live myself that I had to be in the foreground. Initially, I found it very uncomfortable, especially talking with the audience. I was kind of shy. It’s hard to talk to people! Well, it’s not hard anymore, I’ve been doing it for a long time. Some nights might be more difficult than others. When I used to play Vegas, as a headliner in those early years, I’d have a couple of Jack Daniel’s before going on stage. I wouldn’t think of doing anything like that now. That was just a short crutch at a certain time in my life.

Is there any song you just love and wish you had written?

There are any number I wish I’d written! “My Funny Valentine.” Two of my favorite pop songs of all time are “Ain’t No Mountain High Enough,” from Diana Ross’s record, and the other one would be Earth, Wind & Fire's “After the Love Has Gone.” Brilliant songs.

Among your own songs, do you have a favorite?

I would have to say that the importance of what “Alfie” says, its meaning. You can excerpt certain lines out of that song and think to yourself, “How meaningful is that?” In this time and place that we’re in now, “Are we meant to take more than we give, or are we there to be kind?” You know? Isn’t that true?

Absolutely. I’m curious for your thoughts on digital music composition, which is so popular these days, for instance with electronic dance music. Nowadays people can compose music just by sitting in front of their computer.

A day at my home in L.A., I’d get up at 9:30 or 10. I work out every day, three days a week in a gym with a trainer, doing weights, two days a week in a pool with a pool trainer. When I’m out on the road like this, I stay in hotels with gyms, and I try to stay in shape. My breakfast just arrived! Wow! It’s been hours since I’ve been up today, and I haven’t eaten yet. Let’s put it this way ... I’m not in a normal routine right now.

What is guaranteed to make you laugh?

Do you have any superstitions?

Yeah, yeah, yeah. I had them with the birth of my daughter, going to the hospital every day, at a certain time, by myself. I don’t have phobias anymore. When I was a kid, I used to make sure the gas jets were turned off three times. Crazy stuff. Thank God we got rid of stuff like gas jets. Ain’t enough time for that in this world!

Was there a specific moment when you felt you had “made it” as a songwriter?

“He tried to be a very good person.”