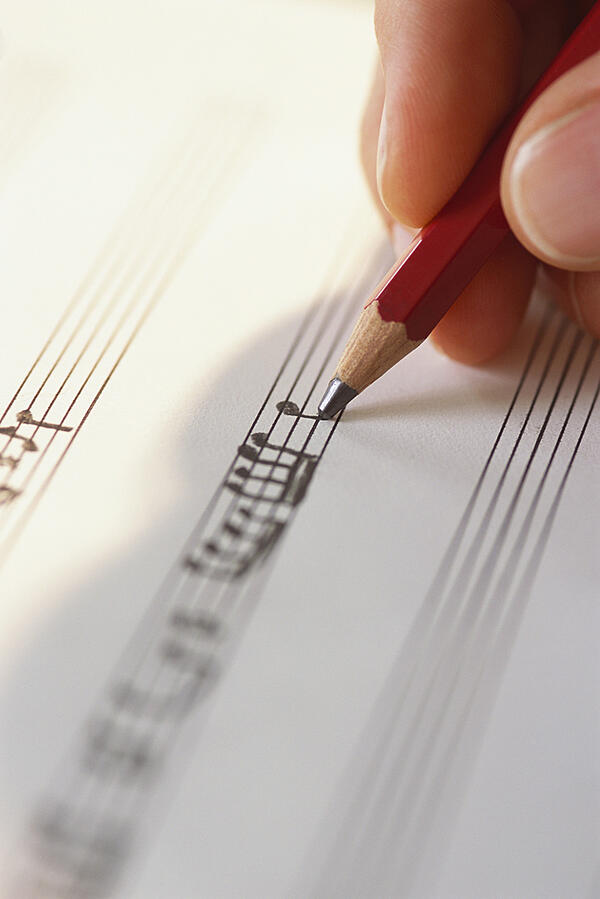 What comes first. lyrics or music?   That’s probably the most common question I am asked when I conduct workshops and seminars.

My answer is that the more variety that a songwriter can add to starting a song, the better.

I try to start each song that I write from a different point of view as my starting point.

1. Writing a full lyric first and then putting it to music.

3. Writing a full track of music with melody but no lyrics.

4. Writing based on a song title.

5. Writing based on a story concept

6. Writing based on a beat or drum loop.

7. Writing using a musical instrument that is not your primary instrument of writing. If you are a keyboard player try a guitar, or vice versa.

All of these are valid and commonly used, or of course a combination of any.

My latest writing technique has been to try to write a complete lyric draft first without even thinking about music. Apple Loops has revolutionized my song writing. Once I have a draft of a lyric, I’ll explore a bunch of possibilities in Apple Loops and choose a groove, usually a guitar lick that works for the first line of my lyric. The rest of the song usually unfolds like a jigsaw puzzle from that point on.

1. Writing a full lyric first and then putting it to music.

In order to write a lyric first, we need to have a starting point for that. Many of my song writing friends and peers always carry a notebook with them during the day and keep one close when they are sleeping. A particular person encountered during the day, a sign on the street, a line from a newspaper or from something on TV is usually a catalyst for a word or line or visual image that can be noted and used at a later point.

I find that in my case, I never think about or analyze my song structures. Usually that first line will dictate where the song is going to go structurally.  A teacher friend of mine has noted that 90% of all; songs follow a structure similar to the children's nursery rhyme

MARY HAD A LITTLE LAMB

IT’S FLEECE WAS WHITE AS SNOW

THE LAMB WAS SURE TO GO

Although that may be an oversimplification, I find that structural simplicity is a good thing to aspire to . In fact simplicity in general works best

Many producer/musician/songwriters work this way. If you have skills as a musician producer, many lyricist/melodists enjoy writing to tracks.   The majority of my song covers were written using this method.  When I have produced a track to submit to a lyricist/melodist, it is produced in a specific manner that I have found works very well.

In my case I try to make my tracks either very contemporary sounding or sometimes, in the case of a ballad, as timeless as possible.  The most important thing to do with tracks, is not to turn them into instrumental songs. They must leave space for the lyricist/melodist to add their part.

3. Writing a full track of music with melody but no lyrics.

One of my successful recordings was written using this method. I wrote a track and then added my own melody on top of the track. The lyricist then simply wrote the words to my melody and the song was completed. many famous tin pan alley songwriters wrote songs using this method. I have found that it works particularly well with ballads.  As a keyboard player I have been able to suggest melody ideas to the lyricist that are unique and unusual. This can lead to interesting places that may not have been thought of had the lyricist come up with a melody to a track

4. Writing based on a song title.

Often an event can happen in ones life or in the world that can inspire a song or story. Sometimes a persons name will do. When writing to a title, I often suggest to my students that they write a short prose story based on that title. That story then forms a data base of information that will feed the resulting song.

5. Writing based on a story concept

A much utilized song writing exercise used by a number of teachers is to write a prose story first. A common approach is to write a story based on a first love. In writing prose stories, we try to add as much detail as possible to give our own unique take to the story. I have found this to be a great starting point for songs. It is something like writing a small play or movies. in fact I believe songs are very similar to little plays or movies.

6. Writing based on a beat or drum loop.

In hip hop and rap, beats predominate. Again a simple starting point would be to go through the volumes of beats that are available and jam some words along with the beats. i find that it doesn’t matter at first if the words make sense or not. Ultimately as a a result of constant repetition a line will come through that makes sense and defines the meaning of the beat. A song lyric can then unfold based on a starting line.

7. Writing using a musical instrument that is not your primary instrument of writing. If you are a keyboard player try a guitar, or vice versa.

I am a good keyboard player. On guitar, I know three chords. However some years ago I produced and wrote an entire rock album written exclusively with my limited knowledge of guitar. This created a simplicity and rock feel that I could never have achieved had I used my normal writing instrument.

Song writing collaboration is a great way to extend ones vocabulary in writing songs. That vocabulary can be extended with different genre’s, styles age differences, geographical location and different specialization and skills.