Understanding the Most Common Song Structures 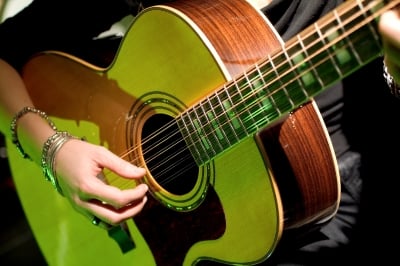 When I first started writing songs, I went through a phase where I had no regard for song structure. I thought to myself “Everyone writes a verse then a chorus, then another verse and another chorus. That’s so bland. I want to be different!”


What I didn’t realize at the time, was my songs were chaotic. And as a result no one wanted to hear them again after the first time. There was nothing to pull them in. There weren’t memorable.

Song structure is important because it organizes our songs. You don’t have to reinvent the wheel in order to be creative.


Think of the most common types of song structures as universally agreed upon roadmaps for your songs. They tell us where the song is going. We’ve heard the most common structures so many times that we’re practically trained to know what section is coming next. While that might seem like a bad thing, it’s not because it brings a familiarity to our music which makes people want to hear it. It does that from the very first time we hear a song with a common structure.


The Most Common Structures

With that in mind, let’s look at the most commonly used song structures in popular music.

This one’s also known as an ABABCB structure, where A is the verse, B is the chorus and C is the bridge. This one’s extremely popular. Radiohead’s “High and Dry” is a good example of this song structure.

This one’s a slight variation of the first structure we looked at. The only difference here is the addition of a pre-chorus which shows up before the choruses. A good example of this structure is Katy Perry’s “Firework.” The part that starts on the words “You just gotta ignite the light…” is the Pre-Chorus.

In both of these song structures it’s fairly common for the chorus to be repeated a second time at the very end of the song to really drive the hook of the song home to the listeners.

This one’s a bit of a departure from the first two structures we looked at. It’s also known as an AABA structure. This time A denotes the verse, while B denotes the bridge. There’s no chorus is this type of structure. Instead, each verse usually ends (or begins) with a refrain. A refrain is a line or two that repeats throughout the song. Since it’s usually the title, the words of the refrain usually stay the same, while the rest of the verse lyrics change.


A lot of times this song structure will have a lot of variation in the verse melody, since the verses repeat often. It keeps their melody from getting boring during all the repetition.

Any of these structures can be modified as appropriate for your song. You may have noticed that in “We Can Work it Out” the bridge is repeated twice. This is a pretty common modification of the AABA format since a lot of times a simple verse, verse, bridge, verse structure often makes for a very short song.

Those three song structures are the big ones. There are two others that are common as well, but they’re used less because they don’t have a bridge.

Also know as an ABAB structure, this one is a simplified version of the ABABCB structure, with the bridge omitted.

This one’s also know as an AAA structure. It’s not used often because it’s hard to keep things interesting if all you have is one section being repeated. Like the AABA structure, this one also makes use of a refrain in the verses, as the central focus. Bob Dylan uses this song form in “Tangled Up in Blue.” Take note of the variation in the melodies through a typical verse. It’s crucial in a song with this structure in order to keep the melody interesting.

A bridge helps to change up the sound of a song and keep it interesting. It prevents a song from simply being a repetition of one or two sections. That’s why these two song structures don’t show up as much as the first three we looked at. But you should know that they do exist in songwriting.


The Role of Each Section

Song structure is a bit more than arranging a song’s sections in a certain way. It’s also important to understand that each section typically has a role to fulfill. If you know the role of each section in your song, you’ll be better prepared to modify a song structure, as you see fit.

Lyrically, the verses of your song will move your story forward. The chorus or refrain is likely to have the same words each time, so the verse is your chance to keep your ideas moving along.

Think of your chorus as the big idea for what your song’s all about. That’s partly why your title is most likely to show up in your chorus. Your title also sums up what the song’s about. Melodically, the chorus will be the catchiest part of your song. This is what people will have stuck in their head long after your song is over. That’s another reason it’s good to have your title in the chorus. When people get your chorus stuck in their head, they’ll easily know what your song is called and can find it later when they want to hear it again.

The pre-chorus is an add-on before the chorus. It usually repeats the same lyrics each time, the same way a chorus does. Musically, a lot of times it creates a nice build up to what’s coming in the chorus. Katy Perry’s “Firework” was a good example of that.

The bridge is a departure from what we’ve heard in a song, previously. This goes for both the lyrics and the music. Lyrically it’s an opportunity for a new perspective. Musically, it’s a chance to offer the listener something they haven’t heard before to keep the song interesting.

In the AABA, or AAA structures, the refrain is the line that draws all the attention in your verses. It’s usually at the beginning or end of each verse and is often the title of the song.

The hook doesn’t necessarily refer to a specific section of a song, except to say it’s the catchiest part of a song. Most of the time, it will be your chorus, if your song has one. If your song doesn’t have a chorus your hook will most likely be your refrain. As hit songwriter, Clay Drayton, says “A fish knows the hook… Once it’s in you, it’s hard to get it out.”

Those are the basics of song structure. You can modify the common song structure to fit your song as you see fit, but it’s good to know what they are so you can use them as a starting point. Not only will they bring familiarity to your songs, but they’ll give you a good guide on how to lay out your music.


Anthony Ceseri is a songwriter and performer who has traveled the country in pursuit of the best songwriting advice and information available. From classes and workshops at Berklee College of Music in Boston, to Taxi’s Road Rally in Los Angeles, Anthony has learned from the most well-respected professional songwriters, producers and performers in the industry. For a lot more songwriting information, grab your FREE EBook here: http://successforyoursongs.com/freeoffer/

For Information on the USA Songwriting Competition, go to: http://www.songwriting.net