6 Traits of A Badly Written Song 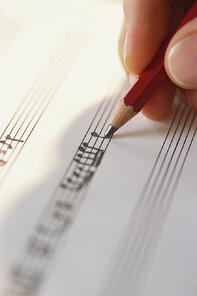 Although we’ve all heard the stories about a great song that was written in 10 minutes, most well-written songs are actually finally crafted by many rounds of re-writes. Many inexperienced songwriters don’t take enough time to hone a song, and as a result, their songs may display a number of undesirable traits. Keep in mind that regardless of the genre of music, from rock to country to goth to rockabilly to alien space music, there are common elements that keep a song interesting to your particular audience, and also characteristics that rear their head when a song doesn’t hold the listener’s attention as well.
Here are 6 traits commonly found in badly written songs that were culled from two of my books, The Music Producer’s Handbook and How To Make Your Band Sound Great. My apologies for using song examples that might seem a little dated, but I wanted to chose ones that most people are familiar with after years of airplay.

1. The Song Is Too Long
Many songs have sections that are way too long. Two-minute intros, three-minute guitar solos and five-minute outros are almost always boring. You are always better off to have a section too short rather than too long. The only exception is if you can actually make a long section interesting, which usually takes a lot of arranging skill and even then still might not keep the audience’s attention. One really long outro that does work, for example, is on Lynyrd Skynyrd’s classic “Free Bird” (don’t laugh––it’s one of the most played songs ever), where slight arrangement changes, kicks and accents every 16 bars really holds the listener’s attention.

2. The Song Has No Focus
Beginner songwriters often have no focus to their songs, which means that the song meanders from chord to chord without a clear distinction between sections. This is usually the result of not honing the song enough and thinking it’s finished way before it’s time. Sometimes there’s really a song in there if you peel it back a bit, but usually the only way to fix it is to go back to the drawing board for a major rewrite.

3. The Song Has A Weak Chorus
Sometimes it’s hard to tell when the verse stops and the chorus starts because they’re basically the same. An interesting chorus usually has something different about it from the verse. It may be just a little different, like adding background vocals or another instrument, or an accent or anticipation to the same chord changes and melody (like Stevie Ray Vaughn’s “Crossfire” with the horn hits and guitar fill). Or it can be a lot different with different set of chord changes or melody combined with the arrangement changes like “Vertigo” by U2, “This Kiss” by Faith Hill or the Eagles’ classic “Hotel California.” Either way, something has to change in the chorus to lift the energy and keep the song memorable.

4. The Song Has No Bridge
Another common songwriting mistake is no bridge. A bridge is an interlude that connects two parts of that song, building a harmonic connection between those parts. Normally you should have heard the verse at least twice. The bridge may then replace the third verse or precede it. In the latter case, it delays an expected chorus. The chorus after the bridge is usually the last one and is often repeated in order to stress that it is final. If and when you expect a verse or a chorus and you get something that is musically and lyrically different from both verse and chorus, it is most likely the bridge.
A bridge is sometimes the peak of the song where it’s at its loudest and most intense (check out the bridge of the Police’s “Every Breath You Take”), or it could be its quietest and least intense point (the Who’s “Baba O’Riley” where Pete Townsend sings “...It’s only teenage wasteland,” or the Doobie Brothers’ “Black Water”).
Almost every great song has a bridge, but there are the occasional exceptions. Songs that are based on the straight 12-bar blues frequently don’t have bridges but might use dynamics or arrangement to provide the tension and release. An example would be the ZZ Top classic “Tush.” There’s no bridge in the song, but the snare fill by itself––after the last verse into the outro guitar solo––supplies the release. Another would be the Guess Who/Lenny Kravitz song “American Woman” where there are just four bars of a different guitar and bass rhythm and a stop that performs that same function as a bridge.

5. The Song Suffers From A Poor Arrangement
Even with great songwriters, this is the most common mistake. Usually this means that the guitar or keyboard will play the same lick, chords or rhythm throughout the entire song. This can work perfectly well and might even be a great arrangement choice if another instrument plays a counter-line or rhythm, but usually it just means that the arrangement will be boring. You’ve got to make sure that the song stays interesting, and that means the addition of lines and fills. An example where a structure like this does work is “American Woman” again.

6. The Song Has No Intro/Outro Hook
If we’re talking about modern popular music (not jazz or classical), most of the songs have an instrumental line (or hook) that you’ll hear at the beginning of the song, maybe again in the chorus, and any time the intro repeats in the song. A great example would be the opening guitar riff to the Rolling Stone’s “Satisfaction” or the piano in Coldplay’s “Clocks.” If you want to make your producer happy, develop your hooks before you do your demos or hit the studio.

• BONUS Tip: They’re not “Originals”
A sure sign of an amateur writer who doesn’t take writing songs seriously is to refer to one’s songs as “originals.” A tape that says “originals” really has “club band” written all over it. Nothing against club bands, but no one is going to take your writing seriously when you refer to your songs using that word. It’s much better to say, “Here are some songs that we wrote” or “Here’s one of our songs.” You will be taken a lot more seriously by the very people that you want listening.

This article is used by permission from Music Connection magazine's November 2011 issue. Bobby Owsinski is a producer, author and music consultant who has written 15 books on music, recording and the music business. Read some excerpts at bobbyowsinski.com or read his popular production blog at bobbyowsinski.blogspot.com or his music business blog at music3point0.blogspot.com.