Top 8 Tips To Use Rhyme To Enhance Your Lyrics 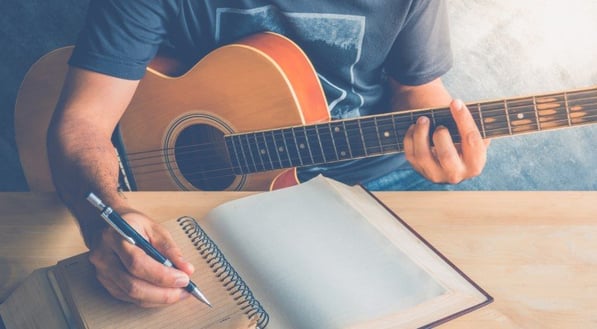 Rhyme is one of the most important tools a songwriter can use to make their work stand out. A classic mnemonic device, rhyme will make your song more memorable, while also adding structure and uniformity to your work. But figuring out what and how to rhyme can be tricky. Check out these pointers for using rhyme to enhance your lyrics!

When you think of rhyming, you probably immediately think of end rhymes - that is, where two or more lines of a poem or song end with the same sound. This is the most common form of rhyming in songwriting, and, when done effectively, really sets your song apart!

I used to rule the world

Seas would rise when I gave the word

Now in the morning I sleep alone

Sweep the streets I used to own

This is an easy rhyme scheme to master, and is particularly useful for writing choruses and hooks of songs!

This scheme, also called monorhyme, has all four lines sharing the same rhyme. This rhyme scheme can be a little trickier because it requires you to think of more words that sound the same, but is a great tool for building drama in a song. You can see this rhyme scheme in Bruce Springsteen’s song “Shackled And Drawn”:

Pick up the rock, son, carry it on

We’re trudging through the dark in a world gone wrong

I woke up this morning shackled and drawn

Also known as alternate rhyme, the ABAB pattern is a very common lyrical rhyme scheme. It rhymes alternating lines with one another - for instance, in Peter Gabriel’s song “Solsbury Hill”:

Climbing up on Solsbury Hill

I could see the city light

Eagle flew out of the night

One last common end rhyme scheme involves two lines that don’t rhyme with one another, alternated with two that do. You can hear this rhyme scheme in The Beatles’ “Let It Be”:

When I find myself in times of trouble

Mother Mary comes to me

Most audiences expect the common end rhyme schemes we listed above, but there are some rhyme schemes that are designed to give listeners something unexpected. For instance, Coldplay uses an AAAB rhyme scheme in their hit song “Fix You”. In this pattern, there are three consecutive lines that rhyme, followed by one that doesn’t:

When you try your best but you don’t succeed

When you feel so tired but you can’t sleep

Another great example of this unexpected rhyme scheme is in Evanescence’s “My Immortal”:

When you cried I’d wipe away all of your tears,

When you’d scream I’d fight away all of your fears,

And I held your hand through all of these years,

But you still have all of me

Notice that in both of these examples, the fourth line has a different amount of syllables than the previous three lines. This adds another unexpected element to the lyrical structure.

In this pattern, the first, second, fifth, and sixth lines all share a rhyme, while the third and fourth lines share a different rhyme. This classic rhyme scheme is often employed in twelve-bar blues and classic rock - for example, in The Clash’s “Should I Stay Or Should I Go?”:

Darling, you’ve got to let me know

Should I stay or should I go?

If you say that you are mine

I’ll be here til the end of time

So you’ve got to let me know

Should I stay or should I go?

This rhyme scheme breaks the six lines of lyrics into two groups of three lines, rather than into three groups of two lines. A timeless example of this scheme is in Leonard Cohen’s “Hallelujah”:

I heard there was a secret chord

That David played, and it pleased the Lord

But you don’t really care for music, do ya?

The minor fall and the major lift,

A common trap that songwriters fall into is thinking that all their rhymes must be exact, or “true” rhymes - for instance, “might, right, sight, night.” Often, however, words that sound similar, but aren’t true rhymes, are perfectly acceptable! As long as the words have similar vowels, they can achieve that lyrical smoothness that songwriters strive for. For instance, “sleep” isn’t an exact rhyme for “succeed” and “need”, but Coldplay rhymes these words with one another in their song “Fix You.”

Slant rhymes are necessary because there are a limited amount of exact rhymes in the English language. If you only use exact rhymes, your lyrics will all end up very similar, and might bore your audience.

Although traditional rhymes share sounds at the end of words, there are other types of rhyme that you can use in your lyrics as well! One particularly effective type is alliteration, or head rhyme. Alliteration involves grouping together multiple words that all begin with the same letter or sound. A great example of alliteration is in the song “Helplessly Hoping” by Crosby, Stills, & Nash:

Helplessly hoping, her harlequin hovers nearby

Wordlessly watching, he waits by the window and wonders

At the empty place inside

The repeated beginning letters create a beautiful lyrical flow and make for a really memorable song!

Not all of your rhymes have to be at the ends of phrases. Lots of effective rhyming can be done within individual lyrical lines. This is demonstrated masterfully in Bruce Springsteen’s song “Blinded By The Light”, which uses a combination of internal rhyme as well as an AABB end rhyme scheme:

Madman drummers, bummers, and Indians in the summer with a teenage diplomat,

In the dumps with the mumps as the adolescent pumps his way into his hat,

With a boulder on my shoulder feeling kinda older I tripped the merry-go-round,

With this very unpleasing sneezing and wheezing the calliope crashed to the ground.

Internal rhyme is also very evident in hip-hop music, such as in songs by Eminem and Kendrick Lamar.

For really effective lyrics, don’t feel limited to one rhyme scheme! Most songs employ at least two different schemes, often one for the verses and another for the chorus. Using multiple rhyme schemes in your songwriting will make your songs memorable and fun to listen to.

Rhyme is a wonderful songwriting tool, but it’s not strictly necessary! One mistake that songwriters often make is to force the content of their song to fit into a rhyme scheme, rather than the other way around. Your lyrics should convey a story or message, and should have emotion behind them. If that story and emotion is lost by trying to make it rhyme, then take the rhyme out!

For information on the USA Songwriting Competition, go to: https://www.songwriting.net