Songwriting Tip: From Demo To Master 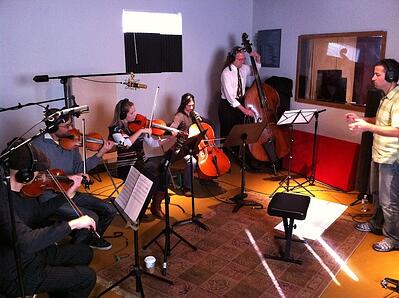 As with previous posts, we continue from the recording artist perspective (rather than pitching a song to a vocalist) where the last article, From Demo To Master, A Music Artist's Experience, left off. This post explores how the song "Golden Rule" was arranged, recorded, mixed, and mastered for release on the album LOVE . HUMANITY . METAMORPHOSIS …

With pre-production complete and crucial decisions made about song structure, lyric edits, and more, "Golden Rule" was finally ready for recording … or was it? Not quite yet. Before we could take the song into the studio, we still had to finalize the instrumentation and arrangement to build the overall vibe of the track.

We'd chosen a great drummer/percussionist for the album, and our producer arranged a meeting with him to go over the feel of the song. They each brought some great groove ideas to the table (our producer has a percussion background as well), and the drummer and I played together a bit to lock in the most natural tempo.

Hearing how the piano and drums fit together, we decided the song would feel great with an upright bass. We hired a terrific player versed in jazz and rock who brought various textures to the album, and for this track, a jazzier pop feel worked best. We talked through the song, played with some ideas, and then it was time to record the rhythm section. We tracked piano, drums and upright bass live in the studio with each instrument isolated in its own room, separated by glass windows for eye contact.

No matter how good your musicians are and or how much you've rehearsed, there's a special magic you're going for in the studio that only comes from letting go and playing until everything "gels" between the performers. Our session was no exception, and once I'd recorded a scratch vocal as our guide for the song, I was free to focus on the nuances of the piano part and how it connected with what the other musicians were doing. Once we had something down that we were all pleased with, I went back and recorded the rubato (out of time) intro and outro sections by myself on piano.

With the basics down, we turned our attention to the arrangement. In essence, "Golden Rule" is a song about empowerment, and we wanted a string section to bring out its emotional strength. It needed to sound both fresh and familiar—inspirational without being cheesy, moving without being "over the top." Violinist/composer Kailin Yong listened to our basic tracks and created an arrangement for violin, viola, and cello that built up to great intensity and also provided a sense of comfort and universal acceptance to the listener.

Once the arrangement was complete and we were all happy with a midi demo of the parts, we scheduled a recording session for the strings. Kailin played lead violin, joined by Tom Hagerman (DeVotchKa) on second violin, Mackenzie Gault (Flobots) on viola, and Beth Rosbach (Sphere Ensemble) on cello. Our producer took on the role of conductor, with an engineer who specializes in live recording at the board.

The string players were charged with bringing more to life than just notes on the page: each musician would also fill the music with the emotions of his or her own experiences from childhood. Though I knew some of them well, I had just met others for the first time that day, so we connected for a bit and exchanged a few brief stories before tracking began. As we layered several takes of the string section, a mini string orchestra evolved before our ears, and I heard the incredible difference it makes to record live musicians.

After the strings were finished, it was time to lay down the final vocal. Every singer needs to feel supported by the music, and I realized how much easier it is to deliver a solid, heartfelt performance with a strong, grooving rhythm section and beautiful string arrangement backing me up. We spent some time listening back to the takes and comping the best phrases into a cohesive track that reflected the message and openness of the song.

But capturing great performances with great sound is not enough: the complete picture of a song is brought to light by an exceptional mix, and we were fortunate to be working with a producer whose specialty is mixing. He had a vision for each song—and the entire record—from the beginning, as well as a strong understanding of my own sonic preferences. We left him to his own creative devices and returned to find the unique sound and placement of each instrument perfectly treated in a stunning mix that drew the listener in and highlighted all of the most special moments of the song.

The final mix of "Golden Rule" (and eleven other songs) then went to our mastering engineer, who processed or "sweetened" the audio to maximize sound quality for both CD/digital and vinyl/analog formats. Since the sound of this music was intimate, sweeping, and highly organic, we chose to master the album for high dynamic range. Unlike many "wall of sound" tracks released since the compact disc began to dominate the industry, compression was used sparingly to keep the quiet parts quiet and the big orchestral parts loud and powerful by contrast. The result is a listening experience of greater sonic depth (and an absence of ear fatigue).

"Golden Rule" had completed its evolution from demo to master. From pre-production to arranging, to recording, mixing and mastering, the process was a detailed, lengthy, and enriching one that not only prepared us well for future recording projects but provided a fulfilling creative journey in and of itself.