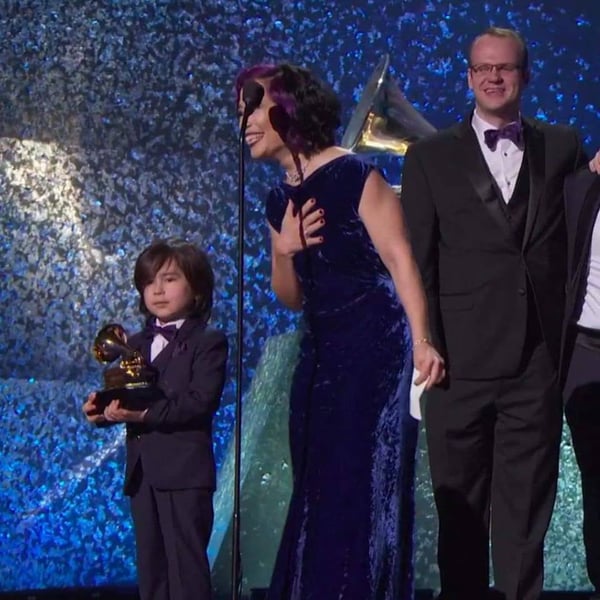 Before she made an acceptance speech, she handed the Grammy trophy to her 5 year old son, she told him "Don't drop it". She went on to say "Thank you to the Recording Academy, thank you to the voters. I have been making music all my life. I have to honor all the sounds in my heart and in my head. This is beautiful. This is such an honor to be on the ballot with all these nominees".

She went on to say “This album was written and recorded by a Latina woman. It was produced by a woman.” She also gave a shout out to her mom in Dominican Republic and appeared overwhelmed by her win.

She beat out other nominees in her category such as Tim Kubart (Grammy award winner in 2016), Falu, The Pop Ups and Frank & Deane.

Lucy Kalantari is an award winning children’s artist based in Brooklyn, New York, making jazz age inspired music for families. Since the Fall 2017 Lucy Kalantari & the Jazz Cats has been featured on Sprout House, the musically-infused programming block on Universal Kids. Her songs are on steady rotation on SiriusXM Kids Place Live and other family radio programs around the country.

As you begin the year, we wish you great music making, prosperity and autonomy…and hope you have your best year yet.

Today, I’ll list five things that will specifically help you meet your songwriting and music making goals for 2017.

1)      Pick your biggest wins. It’s easy to get overwhelmed with songwriting and music making ideas you want to implement. Instead of attempting everything from your book or tape of ideas, melodic lines, lyric ideas, becoming overwhelmed and paralyzed and completing nothing, pick one or two ideas that will give you the biggest wins.  Give yourself a deadline to complete them. Then pick two more. For example, if you run into a songwriting block today to a completing a break up song, try it again in 2 days time, this will give you a new perspective and might give you a bigger win in 2 days time when your mind is fresh. Make your single focus to get to finish that verse or pre-chorus or melodic line that didn’t work earlier in place in the next week. Then move on to your next big idea.

2)      Rewrite your song. People often wonder what hit songwriters like Desmond Child do to write iconic hit songs. The answer is simply that words matter and he’s very good at picking and combining words that catches the audience’s ear. He wrote “If You Were a Woman (And I Was a Man)” as a sole writer, the song became a minor hit for Bonnie Tyler in the middle of 1986. Desmond said “I was sore at the record company for not pushing that song”. "I'm going to prove that that song's a hit! So we wrote it again".

Although Desmond was dissatisfied with its success in the US and UK, he did not give up, he rewrote the song and it became one the biggest and most iconic hit song in rock history. Thus, “If You Were a Woman (And I Was a Man)” became “You Give Love a Bad Name” with co-writers Jon Bon Jovi and Richie Sambora. This song also was on VH1's "100 Greatest Hard Rock Songs".

Here is a very important lesson you can learn from Desmond Child: Don't give up, regroup and rewrite your song.

3)      Test and Try writing in a different genre.  Let’s say you love Country music but hate writing in the Rock or Hip-Hop genre. It doesn’t mean you should thump your nose at Rock and Hip-Hop styles.

4)      Experiment by performing yourself as a music artist. Meghan Trainor was signed by a music publisher in Nashville as a songwriter. She experimented and gave it a try as a recording artist. The rest as we say is history, Meghan’s debut single “All About That Bass” became one of the biggest hit single by a debut artist, hitting #1 on the Billboard Hot 100 Charts, selling over 15 million copies worldwide, #1 on 58 different countries, her debut album debut at #1 on the Billboard 200 Album charts and she went on to win a Grammy award for Best New Artist.