[EXPERT Songwriting Advice] 3 Tips for Writing to a Song Title

[EXPERT Songwriting Advice] 3 Tips for Writing to a Song Title 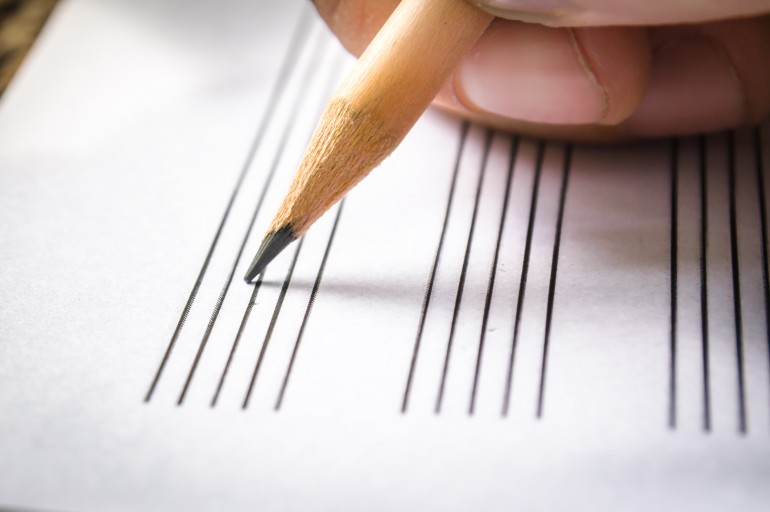 I was recently asked the age-old question, the one songwriters are so often asked. “Which comes first, the words or the music?” Without skipping a beat, I responded, “The title.”

I estimate that more than 95% of the lyrics for the more-than one thousand songs I’ve written began with a title. Even in instances when the melody or a backing music track came first, in almost every instance, the title was chosen before the rest of the lyric was written. This has been the approach my co-writers seemed to expect whether we were writing EDM, country music, pop, rock, or any other genre, and regardless of whether my collaborators were in Nashville, Asia, New York, Los Angeles, Scandinavia, or anywhere else I’ve written.

To be clear, there is no right or wrong way to write—or begin—a song. Successful songs have been started with an instrumental lick, a lyric phrase, a melody line, a drum pattern, a chord progression, a bass line, and numerous other ways. But when it is time to write the lyric, in my experience, a title is typically chosen before the remainder of the lines are written. This is because the title is at the heart of the lyric, and ideally, the lyric is crafted to lead to the title.

Here are some things to consider when writing to a title.

Is Your First Approach the Best?

Once a title is chosen, several decisions need to be made. What will that title mean in this song? What is the best way to deliver listeners to that title? What information should be included in the verses to successfully lead to the title?

There are no “correct” answers. These decisions are part of the creative process. Some writers instantly know how they want to approach their title; it might seem like the only way. But in most instances, various approaches could be effective.

Let’s look at three scenarios that lead to the title, “She’s the One.”

The instant I laid eyes on her, I knew she was the one I had been waiting for; the one I was destined to love.

With one tequila kiss I knew “She’s the One” who could tear my marriage apart.

For each of these examples there are a multitude of ways the lyric could be developed. There is the option of telling a story, or the alternative of finding interesting ways to express how the singer feels. (For tips about writing lyrics that tell a story check out my article “Show – Don’t Tell: Three Steps to Writing Better Lyrics.” Tips for writing “non-cinematic” lyrics can be found in “How to Write Non-Visual Lyrics That Engage Listeners.”

If you decide to tell a story, you will likely need a setting—a location where the action unfolds. For example, in the first scenario did the singer initially see the one he was destined to love:

across the classroom, when he was in third grade?

on a crowded subway, coming home from a bad day at work?

in a supermarket checkout line, where he dropped his wallet?

when her photo appeared on a dating app?

while dancing at 2 a.m. at a downtown rave?

You might describe the sounds, sights, smells, the weather, and more. You are essentially creating a fictional world, and the options are endless. So why settle for the first idea that pops into your mind?

At a recent webinar, I critiqued two songs that each had problems related to their titles. Song #1 had a unique, distinctive title, but no lines of lyric supported or led to that title. Without lyrics that guided listeners to the title, the very clever title felt tacked on. There was no logical reason for the singer to sing that title when the line appeared in the chorus.

Song #2 had the opposite problem. By being overly-clever the writer extracted any genuine emotion from the song. Almost every line incorporated a phrase or image associated with the title. While the writing was exceptionally clever, the resulting song felt contrived, and more like a novelty song than anything suited for today’s hit radio.

For example, if writing to the title “You Are My Heaven,” the lyric will benefit if it includes some images related to heaven, such as halos, clouds, angels, harps, Pearly Gate, streets of gold, heavenly choirs, St. Peter, and more. But over-using these words and phrases can make the lyric seem forced. However, by using this tool sparingly, we can effectively support our title and have it feel like the satisfying, natural conclusion of the lines leading up to it.

What if Your Title Does Not Come First?

Not every song starts with a lyric, and not every lyric starts with a title. Sometimes, lines of lyric pour out of us before we have determined our title, and that is a good thing. Jot these down and see how they might be incorporated in ways that contribute to our song.

Sometimes, a title reveals itself during the writing process. Other times, we might think we are writing to a specific title, but a more engaging one occurs to us as our song evolves. In all these cases, we can still take steps to ensure our lyric supports and leads to our title by revisiting our lyric and incorporating words and phrases that are related to the title. In some cases, our song might be better served if we save unrelated lines for another song.

In summation, like every aspect of songwriting, when approaching a title, our first inclination might provide the definitive approach. But we won’t know if we can beat our initial thought unless we try on others.

Jason Blume is the author of 6 Steps to Songwriting Success, This Business of Songwriting, and Inside Songwriting (Billboard Books). His songs has been recorded by Britney Spears, Backstreet boys and more. His songs are on Grammy-nominated albums and have sold more than 50,000,000 copies. He has been a guest lecturer at the Liverpool Institute for Performing Arts (co-founded by Sir Paul McCartney) and at the Berklee College of Music. For information about his workshops, webinars, additional articles, and more, visit www.jasonblume.com

If you want to increase your odds of being a successful songwriter, you should read this…

If you want to be a player in the music business, it is really no different than wanting to be a player in the NBA or NFL.  All three are extremely difficult, competitive professions where good is rarely good enough.  Great is what is required and even with that, there are no guarantees.  Succeeding in the music business is no easy thing.  So many things have to come together and fall into place in order to create something that is great.  One of the most important elements is the song. The song is where it all begins and if the song doesn't have it, everything else is wasted effort. So try and be more objective about your songs and don’t settle for good. Learn to recognize the songs that have the potential to be great and those that don’t. Writing a song can’t always be fun, sometimes getting from good to great is hard work and requires craft, dedication, and patience. No truer words were ever been spoken than the saying, “great songs aren’t written, they are rewritten”

With this in mind, in my opinion, using MasterWriter will give you that all important edge and help you get from good to great. The comprehensive reference, tools, and organizational features, together with the ease of use, makes it a powerful songwriting tool.

Here are some of the features:

1 – A rhyming dictionary that contains perfect rhymes, close rhymes, phrases that rhyme and a syllable filter that allows you to search by syllable. You don’t have to stop at the first rhyme that makes sense; you can collect as many as you wish by simply double clicking on the word. Clicking on Collected allows you to review this list of possibilities next to your lyrics. This goes for all of the dictionaries

2 – Word Families is a dictionary that will open up a new world of possibilities for unique and imaginative descriptive words and ideas.

3 - The Phrases dictionary will show you every phrase that contains your search word or you can search the entire list. This is an idea factory that is filled with hooks. Say goodbye to “writer’s block”.

4 – The best Thesaurus and Dictionary on the market

5 – Figures of Speech gives you instant access to metaphors, similies, idioms, oxymorons, onomatopoiea, allusions, alliterations and Intensifiers, a new one-of-kind dictionary of intense descriptive words. Also included are filters that allow you to be more specific in your searches. This is an amazing source of ideas and directions that will spark and greatly enhance your songwriting.

When you enter a search word, all of the dictionaries search simultaneously. Why struggle to find the right rhyme, word, or phrase when MasterWriter will show you all the possibilities in an instant?

6 – The World; a Pop culture Dictionary with over 11,000 Icons of American and world culture that links to information on each entry, plus a searchable Bible, Old and New Testaments.

7 – An easy to use audio page to capture your melodies.

8 – A built-in word processor plus organizational features that organizes the songwriter painlessly. Come back to that song, days, weeks, or months later and you will find your lyrics, melodies and work product organized and waiting for you under that song title.

If you offered professional athletes a program that would make them only 5% better, I’m betting they would buy it at any price. MasterWriter will make you a better songwriter and by a lot more than 5%. Why wouldn’t  you want that edge?

Hit Songwriter/composer/artist Barry DeVorzon has long been a prominent name in the recording industry.  His work in motion pictures and television has resulted in a number of hit records and soundtracks:  “Bless the beasts and the Children”, recorded by the Carpenters,  Nadia's theme (theme from the Young and the Restless), theme from “S.W.A.T” by Rhythm Heritage,  “In the city” by the Eagles,  “No More Drama” by Mary J. Blige, and the theme from “the Warriors”. He was nominated for an academy award for  “Bless the beasts and the Children” and won a Grammy for Nadia's theme.  His music for television has earned him six Emmys and numerous nominations.

There is a reason why some of the most successful songwriters in the business use MasterWriter. It is simply, the most powerful suite of writing tools ever assembled in one program. This unique and revolutionary software will open up a new world of possibilities for rhymes, descriptive words, and ideas. There is always a better way to express yourself and MasterWriter will show you all the possibilities in an instant. In a profession where every word counts, MasterWriter will take your writing to a new level. Information on Masterwriter, go to: https://www3.masterwriter.com/store/store/licensepromotionNew.do